Fishing when you visit Melbourne.  Have you thought of it?

Instead of idling away the hours at the beach, do something useful.  Fish.

Fishing is not my thing, I’m afraid I’ll hurt the fish if I catch one.  But I am tempted to give it a go on these lovely still mornings we are having.  It is an excuse to be sitting around with what sounds like a productive occupation while a few hours slip by.

Last weekend the sea was flat, the sun out and the wind was blowing somewhere else and not around the foreshore in Port Phillip. I was on the Kerferd Road Pier and it was the best place in the world to be that morning. 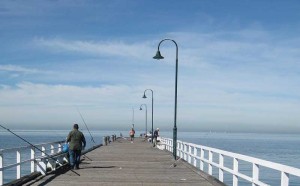 I watched  people sitting around with their fishing rods propped on the pier and lines dangling in the sea.  The owners of the lines and rods were relaxed and in some cases zoned out.

The Victorian Government tells us that there are many fish species in the sea waiting for a baited hook or lure to drift past: Snapper, flathead, silver trevally, Australian salmon, garfish, tailor, barracouta, mulloway, rockling to catch.

On the Kerferd Road Pier the rods took on the relax feeling of the morning and the ones that were baited and in the sea weren’t moving. They rested there and just hung about.  I bet if a barracouta snapped at a lure the rod would whip into the water with the owner would be left staring as it disappeared out to sea. Perhaps no one was expecting this to happen. Perhaps no one was expecting to catch a fish.

St Kilda Pier also has people fishing off it.  One winter’s day last year a chatty man told me he was there every morning with his line out.  He didn’t really expect to catch much but it gave him a reason to get into the outdoors and he was able to say hello to the fairy penguins that live in rock burrows at the end of the pier.  He knows these burrows well and greets his favourite penguins every morning.

He sometimes catches a fish.  If it is a fish-catching day he takes it home and eats it for lunch.
“Nothing like fish straight out of the sea,” he told me.

One of the men fishing on the Kerferd Road Pier told me he always used fish for bait because, as he explained it, “fish liked to eat each other.“
He says he has caught herrings off the wharf and if it is a good morning he gets a fresh herring for bait.

The question I didn’t ask these men was, ‘Where are the women?’   I have yet to see a woman with a line over the side.  Are there any women around who like fishing?

The number 1 tram takes you to the terminus at the corner of Victoria Street and Beaconsfield Parade. Kerferd Road Pier is a hundred meters or so walk towards St Kilda.

If you need time out from the Kerferd Road Pier there is always the Sandbar Beach Cafe where you can sit so close to sand you can wriggle toes in the grains. 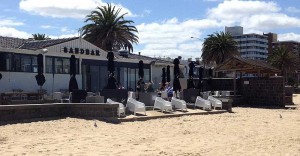 Information regarding fishing in the bay can be found on the government web site
http://agriculture.vic.gov.au/fisheries/recreational-fishing/fishing-locations/go-fishing-port-phillip-bay
http://www.sandbarbeachcafe.com.au/

An evening picnic to celebrate this birthday has been arranged for this Friday, the 17th of November 2012.   The friends of the St Kilda’s Botanical Gardens are celebrating the garden’s 151 birthday by inviting everyone to a free picnic from 5- 8pm – picnic into the dusk is what they are saying. They have…