Batch is still here. I first wrote about Batch on this blog in 2010.  It is wonderful to find that some places don’t turn over.  The media is full of reviews of a new place opening their doors.  So they should be we need to know what is happening out there.

For example Fitzroyalty (a favourite blog of mine that is about the north side of the city)  mentions places closing down and then opening in a new incarnation.  This seems to be a common occurrence in Fitzroy the suburb he writes about.

I always find it sad to see an empty shell with For Lease signs stuck all over the windows and remember that it was once someone’s dream of success.

One particularly sad place I saw recently is Bettina’s on Bay Street.  It was well known for years as Pane e Tulipani. Do you remember it?  Suddenly it became Bettina’s with a different vibe and menu. Then just as suddenly it become For Lease.  I used to buy coffee there when I was in the area.

Batch has weathered all this.  Although I think the owners kept the saying, “If it ain’t broke don’t fix it” as a rule of thumb.

In 2010 I linked to a 2005 Age review by Matt Preston.   You can still read the  review through my previous blog. This cafe has been in its spot alongside a Jewish bakery for over 10 years.  The Jewish Bakery hasn’t changed and Batch has retained it’s cluttered New Zealand theme. 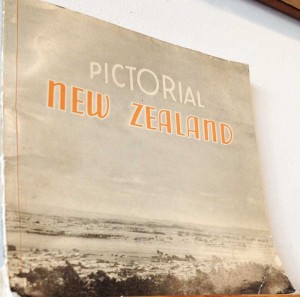 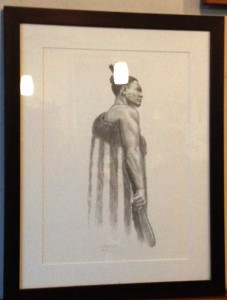 Wall decoration of a Maori warrior at Batch

Breakfast was as good as I remembered and the coffee better.  I ordered scrambled eggs with bacon and mushrooms. The scrambled eggs were perfect.  The bacon just how I like it, crispish but not dried up.  The mushrooms were delicious but as you can see in the photo there were lots of them.  Too many.  They were rich, buttery and flavoursome.  I asked if it was possible to order half a serve next time but the answer was “No. That’s how they come.”  I sent half back and it seemed such an obvious waste of food. Batch if you are reading this.  I think you should re-think your policy on half-serves. 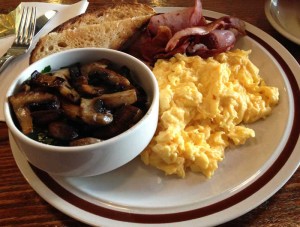 A grocery and delicateness nearby has gone and the building is now a 24/7 Gym. The nearby BP petrol station has made way for an apartment block that is under construction.  New residents will find Batch a good pit stop before rushing off to work. It opens at 6.30am.

Batch is friendly & efficient.  It was great in 2010 and it is still great.  It has some of the best coffee and food on Carlisle Street.

If your idea of heaven is whiling away a few hours amongst retro/re-cycled/vintage clothing and collectibles, then head for Lost and Found 12 Smith Street, Collingwood. It is said that one person’s trash is another person’s treasure.  The odd thing is that there is so much ‘treasure’ left around.  When you walk into Lost…