Bell’s Hotel has had a make-over.  It is open, light and roomy.  On one hand the real pub feeling that you would find somewhere like The Local in Port Melbourne has gone.  On the other it hasn’t  a real gastro pub vibe like Lamaro’s in  Cecil Street.  It seems to have decided to be all things to all comers and its Pokies sign outside is larger than the sign telling you it is Bell’s Hotel.

The place is on the very edge of the CBD and the city is its back-drop especially the shining gold of Eureka Towers. 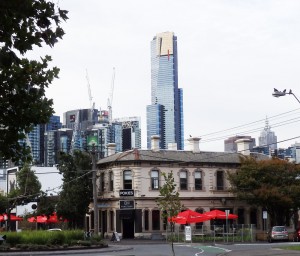 Bell’s Hotel on the very edge of the CBD

We were there for the Monday and Tuesday night special – your main meal for $15.00.   For me it was a relaxing and easy way to end the first day of the working week.

Renovations to Bell’s have created large open spaces with some alcoves to break it up.  We sat at a table near the bar.  Their web site says “The Parlour Bar features one of Melbourne’s longest bars”.    It is long and a good space sit and drink. When we were there, there weren’t any stools but I’m sure they appear at sometime – perhaps when the place is buzzing. 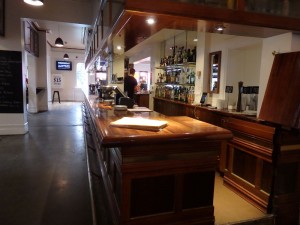 The long bar at Bells Hotel

We ordered our food from the main menu where all the mains were $15.00 including the fillet steak.

This is what we ate. 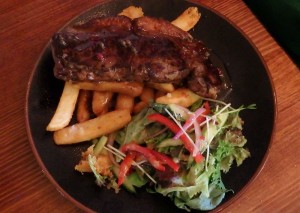 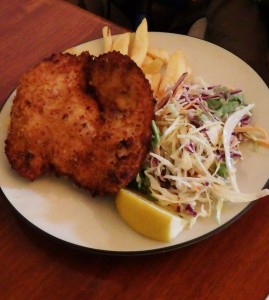 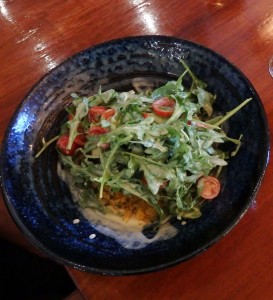 The food arrived so quickly after we ordered, our first thought was that it could have been partially cook and just finished off.  This was an illusion because the steaks were moist, as was the schnitzel.  The chicken salad tasty.

The food was good and very good for $15.00  We plan to go back for another early-week dinner.  The staff were attentive and friendly their manner contributed to  the relaxed, easy feeling of the place.

We didn’t explore other areas of Bell’s as it was a chilly evening but the web site shows a roof top terrace and its stunning views.  On a warm evening this could be a great place for a drink and city views.

Fun, food, fashion, music and crafts – it is all at the South Melbourne Night Market. The market is held in the South Melbourne Market building every Thursday night until the 5th of March. It is lively and most of it is under cover so regardless of the weather you can enjoy it. Music…