Cafe Barcelona is bar and cafe in a long narrow space, with such a narrow street frontage it is easy to stroll past without really noticing it. 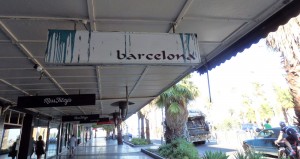 We found it because one of our group had a voucher purchased for $19.00 that gives $50 worth of free food for two people – a pretty good deal.  There were four of us for dinner so we planned to deduct the $50 from the total cost and this was agreed by management.

The layout is simple, an attractive bar on one side of which is essentially a corridor, tables on the other, a few tables in the window and outside on the pavement.  the pavement is very wide at this point making  the area a rather like an extension of the restaurant.

I had read a number of reviews on of Cafe Barcelona on Urbanspoon but none of these was recent so I discounted the negative remarks which was just as well as I found that the problems mentioned are problems of the past.
Cafe Barcelona has been in this location for a few years and strangely I haven’t  focused on it.  This end of Fitzroy Street is part of one of my local walking routes.
We settled in, sorted out the voucher and ordered, wine to sip while we chose from the menu. Sangria is a specialty of the house.
The waiter was attentive, exceptionally attentive and chatty.  He suggested that we order two tapas dishes each and share.  This turned out to be about the right amount of food for a light dinner. 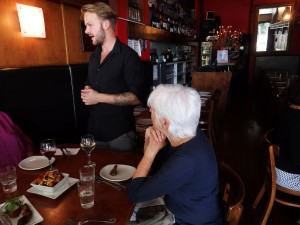 These are some of the dishes we ordered.

The sausage was braised in a sticky pork reduction and was delicious with just the right heat to it for my palate. 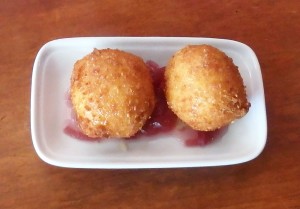 This was my favorite, sesame crumbed goat’s cheese  on a bed of caramelized onion – a great flavor combination.

The least favorite dish of our group was the beef cheek

The menu says the beef cheek was slowly braised in Pedro Ximinez, which I gather is a type of grape and can be a sherry.  It didn’t have the fullness of flavor that I expected and the cauliflower, being a delicate flavored vegetable, didn’t some how add to the dish.   A little disappointing because it can be a great dish.

The roasted Field Mushrooms were stuffed with herb-ed sweet potato puree, crushed Parmesan and served with truffle oil and pesto. 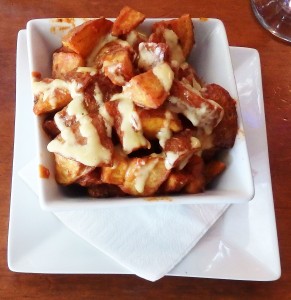 Twice cooked potato bites are tossed through the house spicy Catalan inspired sugo and topped with the house made alloil.  This was pleasant eating but seem a little on the bland side.

We enjoyed our experience at Barcelona and will return.  It was a nice way to end a busy day.

Opening Hours:-  I found some confusion with this.  The Internet has them open from 11.00am until 3.30pm. A friend and I thought we go there for breakfast and found they were shut.  I have been told on the phone                they open daily at 5.30pm until 9.30pm  but they will stay open longer if there are customers.  It would nice to see them sorting this out.

This weekend Inkerman Street in East St Kilda has a change in culture. The railway bridge on the Sandringham Line that spans Inkerman Street between Windsor and Balaclava stations is being strengthened. Inkerman street has been block in both directions for vehicles and foot traffic. So to access the Inkerman Hotel, the popular café…