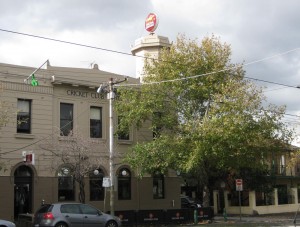 As a by-product of local advertising I found myself there on a cold winter night because a friend reads the back of her super market dockets.  A deal gave two meals for the price of one.  She suggested we “give it a go”.  In view of the wintery weather a pub meal seemed like a good idea.

The Cricket club hotel has been in operation at the Albert Park end of the Clarenden Street since 1870. I’m told it is the nearest pub to Albert Park but I haven’t checked this out. It has had many face-lifts since 1870 and I understand that the most recent was in 2007.
The two for one meal is obviously trying to drum up custom.  This could mean anything and we prepared ourselves for hot food on a cold night but without any great expectations of quality. 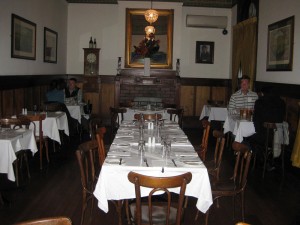 We arrived at 6pm and found our way through two bars, one with a large TV screen and the other with a charming nook for a bit of time out. 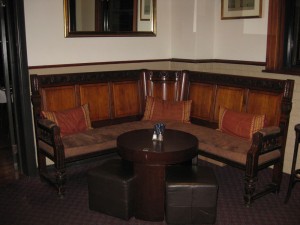 We were first in the dining room and they turned on the heat and settled us by the fire.

There is small menu of standard fare.  M ordered corned beef and I had a chicken parmigiana. 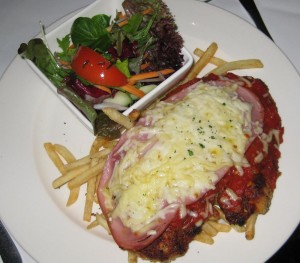 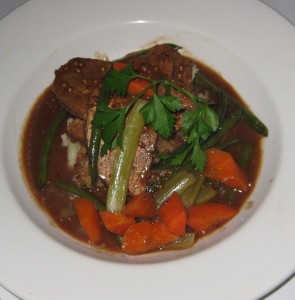 This food was excellent M said it was the best corned beef she had.  I said the same about my parmigiana.  It was delicious.  Not as big as some servings are but quality.

This part of the meal was so good it was a pity the choice of wines by the glass was so limited.  I had a glass of Penfolds Koonunga Hill Shiraz Cabernet 2007.  The 2008 is on sale for $10.00 in my local bottle shop. 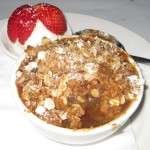 The desserts weren’t of the same standard as the main course.  A sticky date pudding was okay but the rhubarb and pear crumble served in a ramekin lacked the crumble.  The thin oat mixture on the top was soft and lacking flavour. I look for a crisp crumble that has a rocky road surface.

The dining room filled and warmed up.  The service was friendly and attentive.  I was grateful for having a friend who reads the back of the super market dockets and suggested she kept reading them.  We will back.  We may give the dessert a miss but the main course even at the full price is good value.  Prices are the usual pub prices.

“I could live here,” that was my first thought when I stepped into Guildford Lane. It wasn’t such a silly thought.  People do live among the businesses that operate here. Guildford Lane is tucked away from the main tourist laneway-attractions. This makes it quiet and gives it a homey vibe. When I saw the…