When I first came to Melbourne it was Italian.  It felt Italian and the food was Italian – the delis were Italian. It felt exactly like it’s nick name “Little Italy”. I wrote about it here  Now, some years later, it is taking on a more international feel, reflecting the multicultural aspect of the city, with a variety of food outlets .

I recently lunched at Noir, a French Cafe on Swan Street Richmond See here . I got a desire to explore France and French food further.  I explored this wish and I came across La Parisienne Pates in Carlton.  I have visited Lygon Street many times and I must’ve walked past the shop without noticing it.   Now I was focused on France and all things French, I found it and explored it.  It is a deli with a coffee, food and tables at the back. 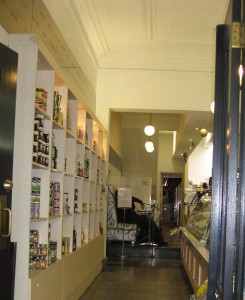 The shop feels French as you walk in. I’m not sure if that is because there is a vase of huge red, white and blue feathers – the tri-colour – in the doorway but French is the atmosphere you get as you enter from the street.
I’m a lover of French Terrines and this is a great place to indulge.  They are not cheap at $48.00 a kilo.  They are already cut and vacuum packed so there is no chance of a slither to take home and try.  The pieces I have bought have been around $9.00 each.  I find the value is fine, it beats making your own.  They are time consuming to make from scratch.   I have tried three now;  Duck and Rosemary, Pork and Pistachio and my favourite is Rabbit and Prune. 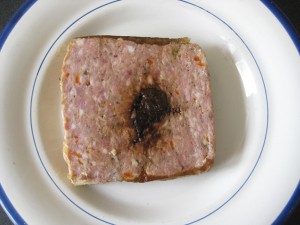 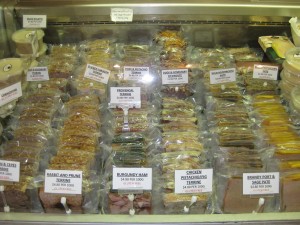 Another favourite is Beef Bresoala… this is air dried beef cut very thinly.  It is wonderful with cheese on French bread. 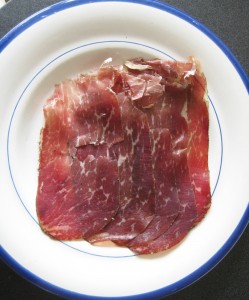 The Saucisson, a sausages similar to an Italian salami is made by the proprietor and is available in many flavours.  For those that are having withdrawal symptoms for then since they visited France they are the real thing. You can usually buy half one but as they keep and to my mind improve in flavour as they dry further it’s worth buying a whole one. 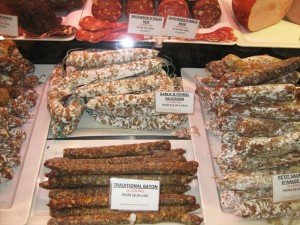 La Parisienne Pates serves food including pies.  I love the rabbit pies.  I always saw these as English but apparently they are popular in France too.  The pies are $7.50 cold and  $8.50 if they are heated and eaten in the cafe with a relish. 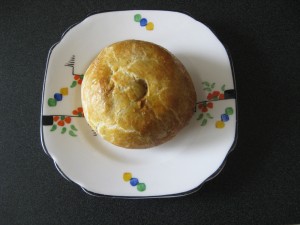 La Parisienne Pates describe themselves as the only true Charcuterie in Melbourne.
French Charcutier Stephane Langlois  makes all his own small-goods from traditional French recipes he brought with  him to this country.

I don’t know of another French Deli in Melbourne who makes their own wonderful terrines and saucissons etc.  If you do let me know.  You can drop a comment in the comment box.

Getting There:
The easiest  way to get there is tram to Melbourne University and walk along Gratton Street.
The trams that go there include; 3, 5, 6, 16, 64,67,72.
There is one hour parking in Lygon Street.

It’s a weekday and you have time on your hands and you’re hungry?  One way to spend part of the day is eating in the Melba Room at The Langham Hotel, 1 Southgate Avenue, Southgate. The Langham Hotel overlooking the Yarra River catching the last rays of the day’s sun. This hotel used to…