On a recent Monday the beach from Elwood to Port Melbourne  was crowded, the roads were hot and the temperature was 37 degrees .  And if the waiter was to believed, 50 degrees inside the section of the Nautical Restaurant at 3 Station Pier that is alongside the water at Port Melbourne. The area was closed.

We arrived there for Locals’ Day where the value is exceptional and we were told our desired spot near the water wasn’t open.

“It’s 50 degrees in  there.  We had to close it.  There is no way we can keep it cool.”  This meant we had to sit in the middle of the large restaurant space.  To some extent this negates  going to dine on the water. But who could complain we were all finding it hard to cope with the heat.

3 Station Pier, or as the place seems to be called now, Nautical Restaurant has locals’ night on Monday and Tuesday when they sever a special locals’ menu. All dishes are 16.50 and include a glass of house wine.

Our group has been twice so between us we have tried the full menu. 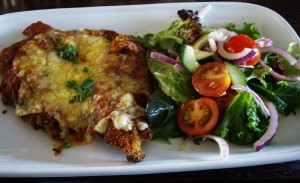 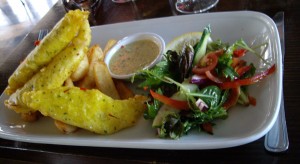 All is great.  The only criticism is that the pastry on the pie was limp. (and I don’t have a photo of this)  This is a common complaint from dinners. Crisp golden pastry appears to be something that is difficult to achieve in a restaurant kitchen.

The included wine is very drinkable and the service has been excellent on any night that we have been there. We will be back.  I am hoping that the area by the water is open next time.  Half the joy of being in such a wonderful location is to sit by the water.

When we sat in the centre of the restaurant there was some quirk of mirrors and I was able to watch the vehicles being loaded onto the Spirit of Tasmania.

However I turned and twisted I was unable to actually view them in reality.  The whole event had to be watched in the mirror.  I wondered if it could be nice moment in a crime novel.

You can check their full menu on their web site
http://www.3stationpier.com/

It has taken me some time to get to the exhibition called Making the Australian Quilt: 1800 – 1950 at the Ian Potter Centre. I read about it back in June and I have only just made time to view these historical works of art. Show me handwork done by women in the past…