I wanted to cook a duck on Saturday. Well two ducks, really – in my experience one duck feeds only two people.
We decided only on Friday afternoon to have  Peking Duck cooked at home for dinner on Saturday.  Buying  the ducks so you can do this is not always easy.

The only ducks available in my local stamping ground were frozen solid.   Now you can thaw them in the microwave but this, in my experience, doesn’t improve the end result – it ruins the skin for one thing.    I declined the frozen ducks even though one of the shopkeepers informed me that there were no fresh ducks available so I would have to have frozen.  I knew he was wrong. I know a place in Melbourne where fresh ducks are always available. 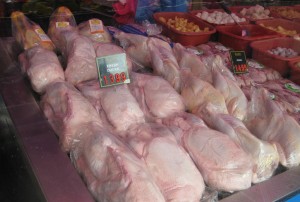 At 9 o’clock on Saturday morning  I headed off to Victoria Street, Richmond.

Victoria Street was waking up.  Most places don’t open until about 10 o’clock but the butchers were out for the early trade and the fresh ducks were in the display cases.

You know these ducks haven’t been frozen, their necks flop and their heads are still attached to them but the feet have gone.  I guess they are sold separately.  The ducks are cheaper too than the ones I would have bought frozen in my suburb. 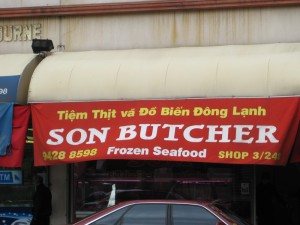 This is my favourite place to buy ducks 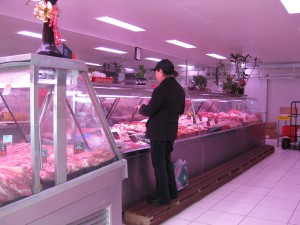 You are shown the duck here for your approval.  I approve at once.  They look much the same to me and I get the head removed, immediately;  I don’t like to look at the yellow beak and the eyes.   I also get some of the excess fat taken off from the tail area – less fat during the cooking process.

Peking Duck is so easy to make at home and tastes so much better that it does as an entrée at the local Chinese eatery. 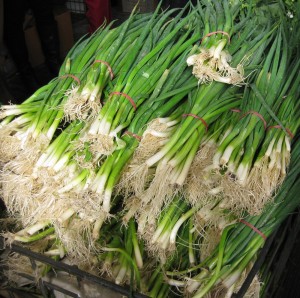 In Victoria Street, I found recently pulled spring onions and cucumbers and the best hoisin sauce.  The brand we like is ‘Lee Kum Kee’.  This is the preferred brand in Richmond – you can buy it everywhere on Victoria Street including the Minh Phat Supermarket where you can also buy the wrappers if you don’t want the bother of making them yourself.

If you decide to make Peking Duck at home you need the ducks to roast slowly on a rack over the baking dish so the fat can drip down.   It’s an easy dish to make – sit around the table with plates of duck meat, crisp duck skin, cucumbers, spring onions, wrappers and hoisin sauce in the middle – everyone helps themselves. The atmosphere is relaxed and friendly and talk flows.

Getting there; – Victoria Street Richmond

The 109 Tram from Port Melbourne goes along Collins Street – through the CBD and then along Victoria Street in Richmond.

The 78 Tram runs the full length of Chapel Street from the St Kilda East, through Prahran into Church Street and terminates at the corner of Church Street and Victoria Street, Richmond. This is a great tram if you live along the route.

My first visit to Shakarhari, the vegetarian restaurant at 201/203 Faraday Street  in Carlton, was a few years ago. I was with a vegetarian  friend who was visiting  from overseas and I  wanted to give her a experience of fine dining –something more than the  average vegetarian fare which often seems to include beans…