Chapel Street on an early Sunday morning is lacklustre.  The glitter and the buzz of Saturday night is over and what is left reminds me of the dregs in last night’s beer and wine glasses.
I begin walking in Balaclava so the first thing that grabs my attention is a tobacconist on the corner of Carlisle and Chapel Street. 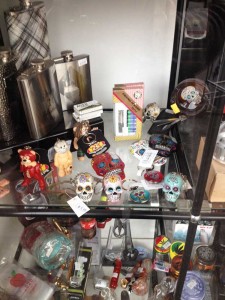 A small part of the window display

It is Edward Scissorhands  Barber Shop. Their windows are a treasure trove.  It is also a good place to replace a watch battery or buy a cheap watch.  One side is the shop is an emporium of objects including knives. They will sharpen knives and cut keys. The other half is a hairdresser.  A traditional man’s hair dresser where they deliver a short back and sides and the elderly men who give these wear the same cuts themselves.  I would take a bet that the same people have been coming here for years.  Change is in the wind.  I noticed the other day they were advertising styling advice.  They have added to their staff.

The street here is quiet except for a few half asleep people at the tram stop.It has a suburban feel. Someone tends a nature strip garden. There’s the St Kilda police station, the local vet, houses with gardens and blocks of units with generously planted common areas and St Michael’s  Grammar School. 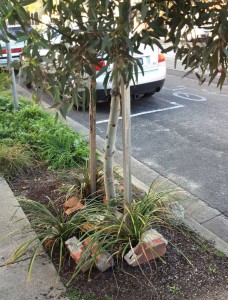 At Dandenong Road I am in Windsor and the street becomes gritty, dreary and hung over with life is still tucked up in bed.  At night Windsor is alive. Its the place you meet your friends and begin your night on the town.  Cafes and restaurants buzz and so do the people. A slow wake up on Sunday is inevitable.
When I first began my life as a property manager I had an unhappy landlord whose property was in Union Street – the heart of Windsor.
She told me, “No one is going to pay top dollar to rent my place if you describe it as being in Windsor.  I want it advertised as Prahran.” I revised the ad.  It is the same post code.  Today I hear more about Windsor from would-be tenants who see it as the place to live.  If you are in the area check out Windsor station. It’s a lovely building.
This morning there is some activity around the station. A hole in the wall cafe by Syber’s Books is serving coffee and the cafe opposite is open.  Not busy but there is trade.
Coffee from the hole in the wall smells good and I am tempted but this is exercises.  Coffee another time.   I walk on past a new council imitative.  Some of the street’s car parks have gone to make room for some greenery.  This morning the new gardens beds are full of litter.

I wonder if someone is employed to stem the flow of this litter? No time it will look like the local tip.  Perhaps  new jobs is being created to help the unemployment numbers.  I resent the diminishing car parks for what can only be a litter collection station.  A similar program is underway on the other side of the street with more parks disappearing.  Council thinking often puzzles me. 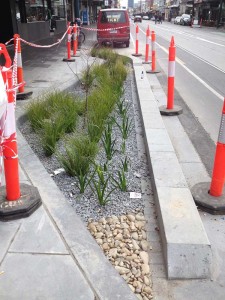 Litter is collecting in the newly formed garden bed

A group of shoe-less and bedraggled girls are on the corner of High and Chapel Street.  Their stylish shoes have become hand ornaments.  They giggle and check each others’ phones.  A successful night out?
There is action outside the Revolver Night Club.  Two burly bouncers are on duty.  Do these guys work all night or are their shifts 8 – 12 and 12 to 8.  Only it is now past 8 and they are still here.
There is a bevy of taxi drivers also lounging about. Where  were the taxis last night when getting one along this strip was impossible?.

Nearby is Chapel Street Bazaar with the windows dressed for Fathers’ Day. 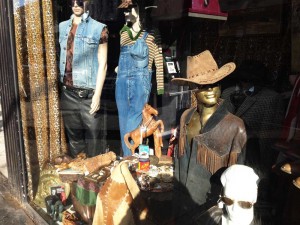 This is an ideal time for window shopping but I try not to.  I tell myself this is exercise and I need to keep going.  Pace it out.  Keep in the rhythm.  I could be in the gym.  There are no shops there.  As I get to the Re-Creation Gym there are a few people turning up in their gear. One guy has little on but his shorts, a tank top and a towel around his neck.  It may be getting on for spring but it is still cold.  Last night’s indulgences may be keeping him warm. 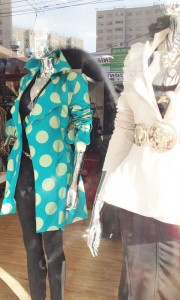 Suddenly there is a coat I want.  A coat to die for.  It is in my favourite colour. I stop. Never mind the fitness.  This is a traffic stopping garment. I drool, I have my nose to the glass, I take a photo and I notice that the waist is tiny.  I am trying to knock my 73 kilos back to 60 something. This is a goal I have had for a while.  A goal that is always allusive.  A goal just beyond my grasp and now I have stopped to admire a garment I would never fit into when I should have been striding it out.  Ah, we can all dream.  I dream and pick up my pace through this South Yarra end of Chapel Street.  Nothing much is happening but time has moved on and somehow  the place looks brighter and more awake.  The day is going to be good one here.   Time for me to head for home. 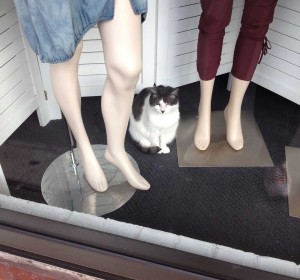 Watched by a snoozing cat.

Coffee and breakfast options.
Two longer term business were open as I passed.
Tusk Cafe Bar at 133 Chapel Street. I can’t remember a time when they weren’t in this spot on the corner of Green
Street with leafy trees in the summer and gas heating in the winter. They don’t appear to have a web site. Check them out on Trip Advisor
Amici at 242 Chapel Street has been there since 2003.  They bake bread as well as supply food – good bread too.

The Station Hotel in Footscray is one of the many corner pubs in Melbourne that has re-invented itself and turned itself into a gastro pub (Gastronomic pub).  No longer the bangers and mash ordered at the counter, now it is dining-room service for these old pubs.  The kitchens are run by chefs who have…